I love children’s television shows and movies. One show that I watch over and over again is Nickelodeon’s Avatar: The Last Airbender.

In the world of Avatar certain people are able to “bend” the elements: water, earth, fire and air. And the people who bend these elements are in different tribes throughout the world, and there is one being, known as the Avatar, who is able to master all four elements and it is this person’s duty/destiny to keep the world in balance.

In the show, we follow Aang, a 12 year old boy who has to take on the role of being the Avatar to bring balance to the world in a time of war. It’s a great show, and you should watch it with your kids. But I think the idea of the elements has some useful lessons for parenting.

To quote from the show: “Air is the element of freedom. The Air Nomads detached themselves from worldly concerns, and they found peace and freedom. [pause] And they apparently had great senses of humor.”

“Water is the element of change. The people of the Water Tribes are capable of adapting to many things. They have a sense of community and love that holds them together through anything.”

“Earth is the element of substance. The people of the Earth Kingdom are diverse and strong. They are persistent and enduring.”

“Fire is the element of power. The people of the Fire Nation have desire and will, and the energy and drive to achieve what they want.”

As a parent, I would say that my natural element is water or air. I like to go with the flow, I’m not big on having a rigid routine or doing the same thing every day. I want my daughters to trust their instincts. I prefer to redirect their energy rather than argue the finer points of justice and fairness with them.

But I’m finding that sometimes, my daughters need me to parent out of my element.

It’s uncomfortable. I would prefer it if my natural instincts were adequate to the task of raising a completely well adjusted human and that this didn’t require extra growth on my part. But, I don’t think that’s the case. To help her be all the she is, I have to be more than I am.

I am not always comfortable with power. I don’t want my children to be afraid of me or feel like they don’t have a voice in their own life. But I think that, as a parent you have to have to be able to channel your inner avatar. You have to be able to master all four elements – not to control or manipulate your children, but to create balance and help them master their own lives.

I hate to leave you on that note, so I’ll share one more thing I love about this series. Sometimes, Aang doesn’t get it right – he tries to save the world several times before he finally gets it right. The characters in the show mess up and fail, sometimes in really big ways. But in this show, and hopefully in all of our families, there’s a lot of forgiveness and redemption. 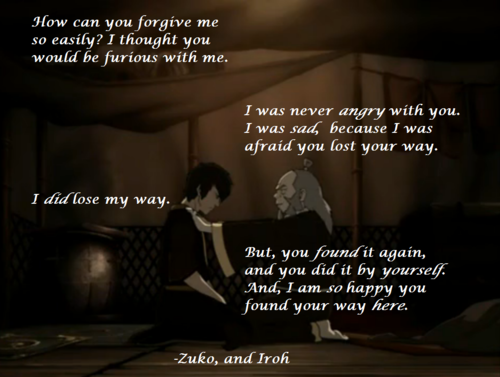 Being a parent isn’t about getting it right every time. It’s about finding your way home, forgiving yourself and forgiving your kids when things go wrong.